Each of us know full well that sceptics habitually, and often unthinkingly, dismiss all forms of mediumship as the product of fraud. Alternatively they advance other theories to account for accurate evidential mediumistic communications. In their world communication with the so-called dead cannot occur because ‘the dead are dead’.
However, in my long considered opinion the one thing they undoubtedly share is that they fail to give credence to past positive conclusions involving mediums who were extensively examined by highly credible people of academic and often of social standing. As we know the world of stage magic has always been dismissive of mediumship and habitually look for methods which they believe mediums employ, by using a variety of tricks, to fool the unsuspecting public. One can to some extent appreciate this because a magicians mind is very understandably programmed in that way. However, that aside, there can be no doubt whatsoever that sceptics, beyond stage magic, have always assumed a dismissive all-knowing position primarily based upon an ignorance of fact or pure unthinking supposition.
This book, which I very highly recommend, tells the story in some detail of one man’s devastation following the most unexpected death of his father. Then, he sets forth upon a journey to investigate mediumship in an attempt to rationalise whether death marks the end of life or is a passage into a larger one. Throughout he goes to extensive lengths to establish whether his evidential readings, with a seemingly excellent medium, could possibly be explained away and dismissed. Indeed his rational sceptical mind would not allow him to fully accept that his father from a supposed Spiritual world was communicating with him and his family. Thereupon, over a long period of time, he went to extraordinary lengths to extensively investigate mediumship seeking out possible alternative explanations to account for apparent outstanding evidential communications received from his father.
As I read the book it began to occur to me that Mike Anthony’s journey, as carefully detailed, presented the perfect counter argument to the habitual sceptics (magicians or otherwise) who are so very dismissive of all forms of mediumship. In a few words it would be impossible for me to do justice to the book but I shall end this review by stating without any hesitation whatsoever that whether intentional or otherwise it repeatedly presents facts that any rational reader could not possible dismiss. I therefore congratulate Mike Anthony for creating a unique outstanding informative read and I shall end by congratulating his beloved father who – through dedicated persistence – eventually proved that indeed he had survived the change called death and his continued love for his family was as intensely strong as it had ever been. 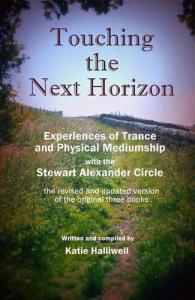 Touching the Next Horizon
Katie Halliwell

Comment: In July 1999, at one of my Guest Circle evenings, a lady called Katie Halliwell was one of the sitters.

After that night she was to attend several more of our Guest Circles and in 2002 we felt moved to make her an Honorary member of the Circle.

Little did we realise then that the Spirit World had, in effect, orchestrated that because they saw in her an opportunity to further broadcast the reality of survival.

A year later (2003) her booklet ‘Experiences of Trance, Physical Mediumship and Associated Phenomena with the Stewart Alexander Circle’ was to be published. Within it she recounted her experiences and observations etc. within the Circle. Then, in 2006 under the same title, Part Two was to be released followed in 2011 by Part Three. However, that was not the end of her work because in 2020 she took the decision to blend all three parts into a book – a revised and updated version which is entitled: ‘Touching the Next Horizon’.

Published this year by SNPP it is an invaluable compilation of the three booklets and much more and it carries the message of survival loud and clear and I congratulate Katie Halliwell for taking the time and trouble to create it. Sincerely I hope that it will reach out well into the future with its clear message of survival and séance room communication.

On the Edge of the Etheric: Survival After Death Scientifically Explained
J. Arthur Findlay

Comment: Until I was in my very early twenties I had no interest in the movement of Spiritualism. Then my brother purchased a copy of this classic book and later passed it onto me. Reading it from cover to cover it was, for me, akin to a literal revelation for it answered the vital question that man has asked since he first set foot upon this earth: what happens after death – does anything happen or is death the end of life? From that moment on my journey truly commenced and the rest is now history. I have absolutely no hesitation in recommending this book which not surprisingly became an international best-seller.

Comment: This book was recommended to me by a respected Psychical Researcher (an acquaintance of many years) and is, beyond question, one of the finest that I have read since: ‘On The Edge of the Etheric’.

Written by a one-time minister of the ‘Church of Scotland’, with a scientific background, it presents powerful evidence of survival beyond death and his thoughts as to how this correlates to the Christian faith.

This is a MUST READ..

Comment: In almost half a century I have copiously read, researched and educated myself in respect of Spiritualism and associated matters. Without any hesitation I consider that this ground-breaking book (published in March 2017) must surely stand alongside Arthur Findlay’s: On the Edge of the Etheric. Although I have personally contributed a chapter it is not for that reason that I would confidently recommend it. Written from a rigorous journalistic perspective, it covers a broad range of evidence for life after death and my chapter is just one amongst nine other contributors. It is also the winner of the 2017 book award from the prestigious Parapsychological Association for books that make a highly significant contribution to science and to the cultural conversation about the implications of parapsychology. Please go to http://www.survivingdeathkean.com for more information.

Voices in the Dark
Leslie Flint

Comment: This book is an autobiography. Flint was undoubtedly one of the finest, most notable ‘Direct Voice’ mediums in the world. Voices of the departed would be heard speaking from a point in space quite separate and therefore independent of him. I had the good fortune to sit with him on several occasions and his mediumship unquestionably had a direct influence upon my own development. The book is both extremely informative and interesting.

This is Spiritualism
Maurice Barbanell

Comment: Spiritualism today is, in my opinion, but a shadow of its former self and has in many ways been morphed into a kind of religion in recent years. This no nonsense book both informs and educates regarding the movements history and its true nature. It was written by the founding and long-time editor of the UK’s leading Spiritualist Newspaper/journal Psychic News which was launched back in 1932.

Comment: The author describes in some detail his own experiences within the séance room of Hunter Selkirk who was a remarkable Materialisation medium. The book was actually structured from a series of letters that the author wrote to his son who was serving in the forces during World War 11. Within them he explained how his deceased wife (his son’s mother) often materialised at those extraordinary seances. A quite remarkable book.

Is There an Afterlife?
David Fontana

Comment: Written by a professor of Psychology and past President of the Society for Psychical Research. Fontana spent over 40 years exhaustively researching, writing and lecturing widely about the subject. Therefore this book was written from a position of extensive knowledge.

They Walked Among Us
Or: Alec Harris: The Full Story of his Remarkable Physical Mediumship.
Louie Harris

Comment: An outstanding account of possibly the finest Materialisation mediumship in history. Throughout his long career, Alec Harris was only once accused of fraud and this occurred many years following his death. The claimant was a leading member of the SPR who, as a young man, had sat just once with Harris. However, many years later, following a sitting with my own Circle, he confided in us that during that sitting with Alec Harris, he had been overwhelmed by the reality of the materialised forms that he had observed. One can only speculate as to why, years later, he had felt the need to publish a demeaning accusation which totally contradicted what he had told us.

Comment: Throughout my own long Spiritual journey, I have been fortunate to meet and to know several people who in various ways have influenced my mediumistic development and who have added to my knowledge of notable celebrated mediums from the past. One such person was Alan Crossley, who throughout his life had met, known, and sat with several celebrated physical mediums who today we can only read about. His book is a wonderful account of his own journey of extraordinary experience.

Please go to https://www.youtube.com/watch?v=ZuEBASIrDGk to watch an Alan Crossley interview.

Comment: A definitive record of the remarkable physical mediumship of Minnie Harrison, the author’s mother. She worked within Tom Harrison’s parent’s Home Circle of which he was a long standing member. Towards the end of his life, Tom Harrison was also a highly valued member of my own Circle. His book is an eye-witness account of manifestations that so very few are ever privileged to witness.

Comment: Back in the 1920’s and 30’s Margery (Mina) Crandon of Boston, Massachusetts, in America was possibly the most well-known Physical Medium in the world. As such her séances were investigated by many of the most notable psychical researchers of the day with various results ranging from those who found in favour of her mediumship and those that denigrated and denounced it. Critics (and there have always been many) have long concentrated their arguments upon séance room manifestations that could feasibly be explained away and have totally ignored those that could not. During those now far off days, and indeed ever since, she has been at the very centre of considerable controversy. Books, articles, television and radio productions have sought to tell her story mainly with highly biased information which has propagated the myth that she was fraudulent. Truth, half-truths, untruths and shear fiction have all been thrown lazily into the mix presumably in order to present a story of fascinating intrigue. However, as a result of my many years of research into the case, I have found that amongst the investigators deeply involved with the case, Malcolm Bird presents a detailed unselective account of what has to be one of the most extraordinary yet sadly maligned Physical Mediums in history.